and he drilled a hole for every nail he put in. Instead of admiring his dedication and expertise, the only comments from other gardeners were on the steeply sloping roof - "Are you building a cathedral?" "Is the bishop coming to open it?" Of course he had built it like a Black Forest house! Later, he built a second greenhouse, and at the top of the plot he laid a splendid series of patios, with walls, seating, raised and sunken areas - using broken pieces of paving and cementing everything in with bare hands, since he could not see, but he could feel when they were straight.
Sometimes I used to think, when we were hard at it down on the plot, that it would be nice to see a bit more of the world - even Barnoldswick was an adventure, on the few occasions we managed to get out on our bikes and ride there. But a Voice inside was telling me, "There is a time for everything. Now is your time for gardening, Other things will come later." And so it did, for in 1995 we cycled to Germany . . .

got on a boat, the journey to Felixstowe took six days and we had to cheat on the last bit, and get a train from Ipswich, as I had booked the ferry to Zeebrugge before leaving home and we were running out of time.
The story of that trip was told on the Real Holiday Show that autumn, but it was not the story I wanted. When Wolf first had the idea, I thought he should get some recognition for what he was doing, and contacted someone in tv. We were put in touch with this travesty of a programme which neither of us had ever watched, so we did not know what to expect. A girl, Louise, was supposed to come with us, but she was in a camper van, on her own, and expected us to turn up at a prearranged venue every evening to be interviewed. Of course it is impossible for any cyclist, and particularly a blind one, to say how far they can travel in any one day. She had to take her chances, and on the few occasions she managed to find us, we were too tired and bloody-minded to talk to her. We were bitten to death by the oil-seed-rape beetles, looking like survivors of the Plague. We managed to lose her before arriving in Felixstowe, and she never turned up on the boat.
In spite of the not inconsiderable difficulties, and maps that were fifteen years out of date (the last time I had used them) we had a great time and great comradeship. I looked forward to that trip as something that would restore balance in our relationship - Wolf relied a great deal on me, but I sometimes felt I was too bossy and too much in charge. On the road I would have to trust in his strength and protection and take a back seat. He was a wonderful person to travel with. He had so much natural knowledge - he knew what the weather was going to do, which direction the wind was coming from, and whether we were heading in the right direction. We both had strongly developed instincts, and we were mature and sensible enough to be able to make decisions without either of us ever feeling the other was the 'leader'. Wolf always trusted my psychic sense, and if I said we should not go that way, or turn back, he immediately did. 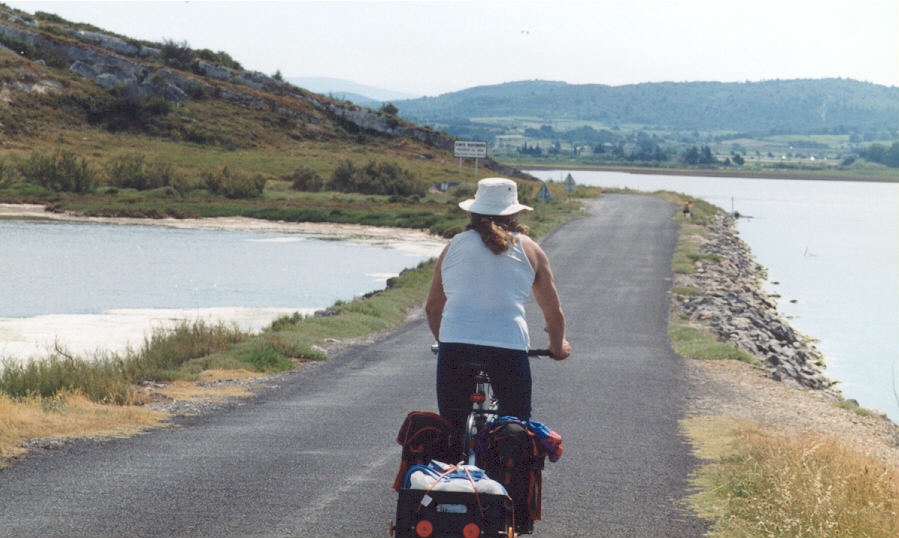 THE 'BIG GIRL' OF PEYRIAC DE MER. Wolf at Peyriac de Mer, near Narbonne, in 1998. By the whistles and hoots from cars, I was sure they thought we were two girls, and they obviously preferred Wolfram. This was confirmed one day when a motorist slowed down, murmuring "Bonjour mesdames!" The look of horror on his face in the rearview mirror as he got a full view of Wolfram's beard was something to see! 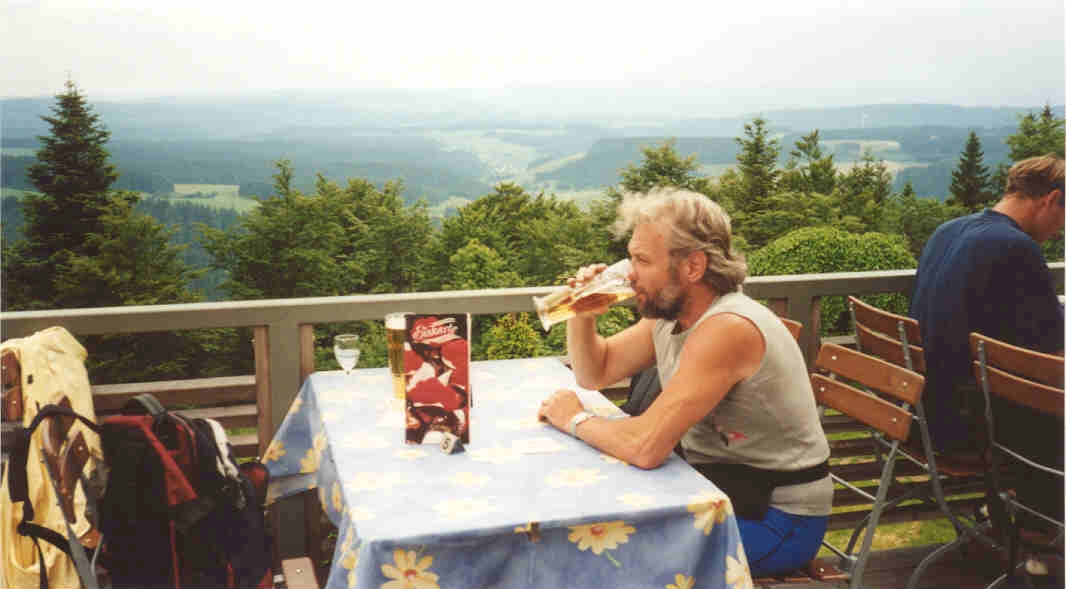 Wolf enjoying a beer on the Restaurant terrace at Brend Turm, 2001. This is the highest point of the forest above Neukirch, and a favourite ride out for us, followed by a ride along forest paths to Martinskapelle, site of the true source of the Danube.