by menfriends and lovers alike, to the life I had to lead with Wolf. Being blind, he had no car, but losing the job with Gillibrand was the biggest blow. As a married couple we received very little state benefits. I could have gone back to work, but the few times I tried part time work Wolf spent the time of my absence in the pub. Putting the kindest interpretation on it, I decided that he needed companionship more than anything, and set myself to create a satisfying life for us without work.
Wolf had a mini-recording studio setup in his rented house, which he brought with him, and over the years he gradually improved and built up his equipment. I never understood anything about it, but he had a well-developed ear for sound technology - one of the benefits of being blind I suppose, and with his interest in music, bands and singers naturally gravitated to him, or heard about him on the grapevine, and afternoons at our house often consisted of singers bleating into microphones and filling the air with their tobacco smoke, singing and smoking apparently being mutually compatible pastimes.
I had already begun studies in astrology, and my little Sinclair ZX Spectrum and one solitary astrology tape was succeeded by an Amstrad PC 1512 in the late 1980s, a present from Wolf with some of the money he inherited when his grandfather died. This could run an astrology program - I chose Astrocalc which I still use today - and a word processor, but not at the same time. You had to close one down then open the other. There was no internet then, and even when it came, the Amstrad was not capable of running it. It was not until I upgraded to Packard Bell in the late 90s that we came of age technologically, and that was thanks to Wolf. I said why did I need internet? He said always get the machine that is capable of the most. So we did. But that comes later.
getting  the local radio involved and they opened a helpline where anyone with stuff to give away phoned in, those needing it phoned back, and many userful things were passed on, and friendships forged. I wrote a column in the Nelson Leader from 1990 to 1995, and people often got in touch through this, wanting to visit our gardens. One man came and chatted a while, then turning to me he said, "You're not from these parts," and I had to admit I was from Yorkshire. "But," he said, turning to Wolfram, "I know a Barrowforder when I hear one!" - "As a matter of fact," Wolfram told him, "I'm from the Black Forest." I put it down to his musical ear. In the 90s we joined some sort of committee set up by the local council to advise on recycling. We had lots of information and ideas which were all ridiculed - they had no intention of doing anything in the ten years they were supposed to spend preparing - as is usual in this money-oriented economy, they waited til the tenth year then asked for more time. Those meetings were a total waste of time and money - one year they used the entire budget of £10,000 to buy low energy lightbulbs for the town hall. In the end we left in disgust. Anyway, the only kind of meetings I enjoy are those where I am talking.
Our 'finest hour', however, came in 1991 when the obnoxious Mr George Wilkinson tried to put us off the allotments. I had invited our Mp to visit our allotment, he had done us a good turn in getting some fencing put up, and anyway I wanted to get him interested in allotment causes, and raise the profile of organic gardening. I informed George Wilkinson of his visit, so he could also be there. The man said not a word, then this almighty furore broke out, which the local press dubbed 'A Storm in a Plantpot'. The Mp visited, we stood our ground, said it was our human right to have our local representative visit our plot. Turned out Wilkinson was a rabid communist, trained in Moscow. I am no Tory myself, but John Lee was elected to represent us, and that's what he did. 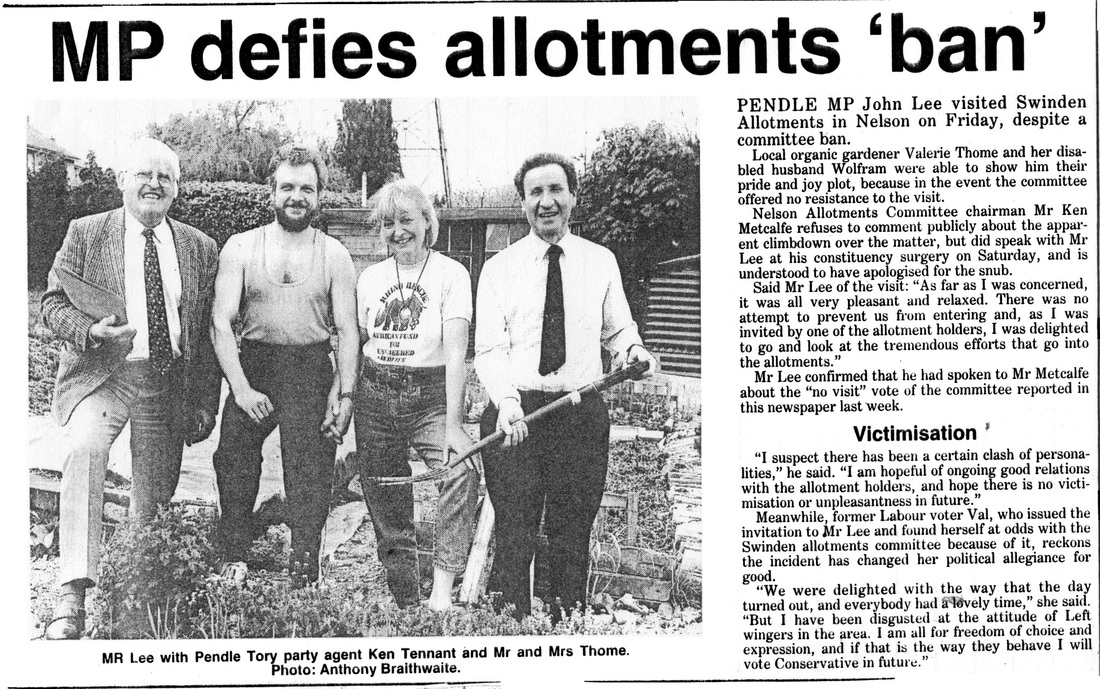 What with all this, and the after-hours witchcraft on the plot, attractive young ladies robing up in the shed, and feasting and drinking afterwards into the small hours, it was a wonderful world down on t'plot!